Make Use of Flex Space At Home 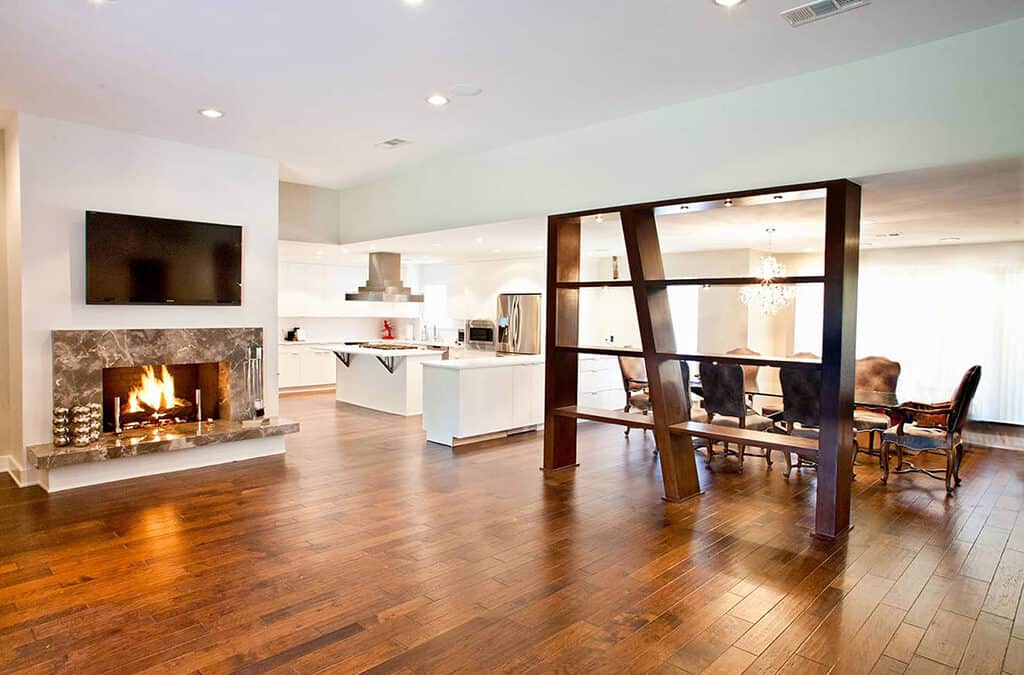 What is Flex Space?

Flex space is a room, wall, or corner that is especially adaptable to several different uses. When designed with the ease of changing functions in mind, it can be a very useful part of your home. In the houses built pre-1980s, floor plans were designed with rooms for specific purposes. The formal dining and living rooms were meant to be fancy so you could receive your guests there. But heaven help the kids who wandered in there with toys or dared to make a mess. These spaces were not flexible.

Fast forward forty years and we now have less of a need for the formality of dedicated, rarely used rooms. In fact, real estate is so expensive, that we can’t afford to use our square footage frivolously. The separation of our work and home lives has all but vanished. We need our homes to do double and triple duty to serve all parts of our lives. Enter flex space!

When the inspiration hits to start a YouTube channel, a podcast, or a part-time freelancing gig, a house that welcomes new ideas is more enjoyable than a home that fights you at every turn. Flex space means the furniture is easily moveable and reconfigurable. It means the lighting and electrical outlets are varied and can accommodate different activities. Having flex space means you can have an impromptu toddler play date in the morning, and work on your Etsy crafting business in the evenings.

If you don’t have the space to dedicate a room as a “man cave” or a retreat in the backyard to call a “she shed,” flex space is the next best thing.

Meanwhile, in those homes and yards where there’s not enough space to construct popular adult hideaways, people are finding other ways to use the limited space available in their homes. In many cases, this demands some architectural and interior design tinkering.

Personal tastes aside, most home buyers will appreciate the “future possibilities” that exist for them when purchasing a home that has already implemented flexible space into its design. With that in mind, here are two of the most popular decisions related to flex-spacing that just about any homeowner can explore.

As we mentioned, the open floor plan isn’t a new idea. It’s probably the most popular trend in home construction over the past several decades.

Moms wanted to be in the kitchen yet still be able to see and interact with their children who were sitting in the living room. Another shift in home architecture was the expansion of the small landing at the top of the stairs which could operate like a mini loft. This “hub” that was once merely the shared entrance to several bedrooms became a pseudo-play area for the children.

The beauty of these open spaces between rooms is that they easily change as the occupants grow up. They work well for TV watching, building model train layouts, studying for the next exam, and for epic sleep-overs and blanket forts. 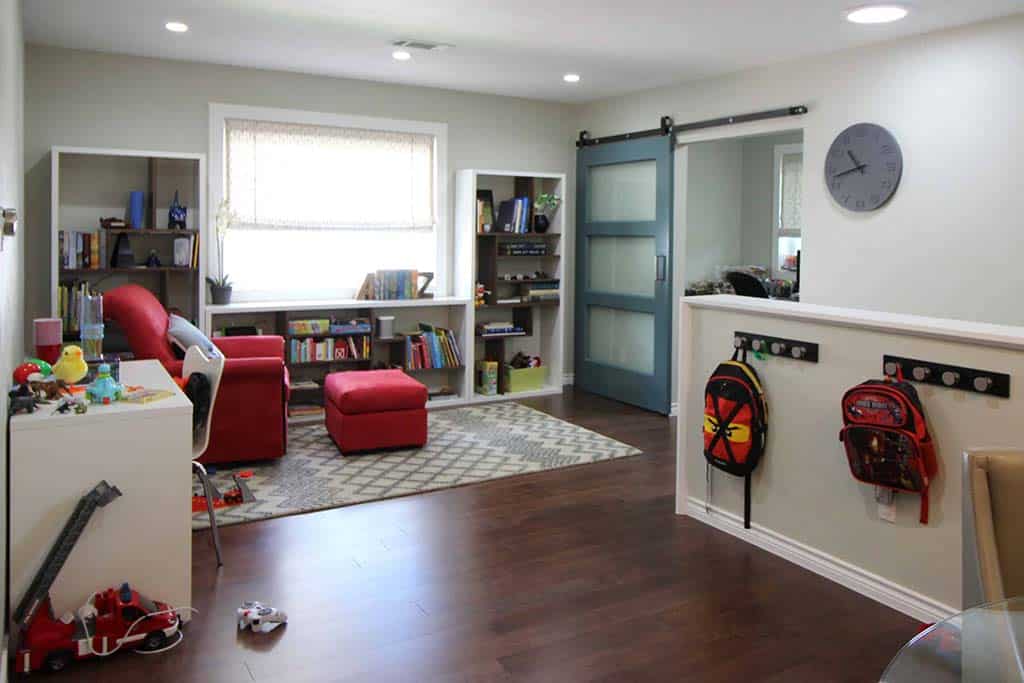 Whatever its function, open floor plans allowed parents to easily hear and see what their children were doing and gave everyone access to each other without having to be in the same room.

Open floor plans were not exclusively designed for people with children. Sitting in the family room with a TV tray on your lap so you could watch the football game during a meal implied that you cared more about football or your favorite sitcom than spending time with your partner. However, being able to see the television from the dining table was an excellent way to solve that dilemma.

More recently, however, some folks have started to crave the sentiments of mid-19th century home designs. In her humorous article in Bloomberg.com, writer Kate Wagner makes “The Case for Rooms”  including calling open-concept interiors: “tyranny”, and noting that while 25 years ago, open plan meant no doors, nowadays the term has come to mean a living configuration without walls.

It’s more acceptable, today, to encourage children (once they’ve reached an adequate stage of development) to have their own space where they can be creative, loud, and messy and where parents can avoid turning the living room into a glorified bounce house.

It’s both annoying and physically exhausting to sweep toys under the rugs and couches whenever your adult friends come over to socialize.

Additionally, while having sight lines and access to multiple spaces on the main floor has its benefits, it can just as easily become a nightmare for someone who wants peace and quiet to accomplish certain tasks (or to maintain sanity).

Some people are tired of using closed captioning to watch a movie in their home because they can’t hear the dialogue while the kids play with their airsoft guns, the dishwasher chugs along, and the spouse runs the Vitamix.

Essentially, then, most flex-space decisions are dependent upon family dynamics. Homeowners could be looking to either knock down a couple of walls to create access or, paradoxically, to build a few new walls to gain privacy.

In either scenario, how you approach space is integral to a functional, pleasant environment, and the most important decision you’ll make is whether or not you agree with the man in Robert Frost’s “Mending Wall,” when he says: “Good fences make good neighbors.”

Except, in this case, you’d be talking about walls and saying: “Good rooms make sane homes.” 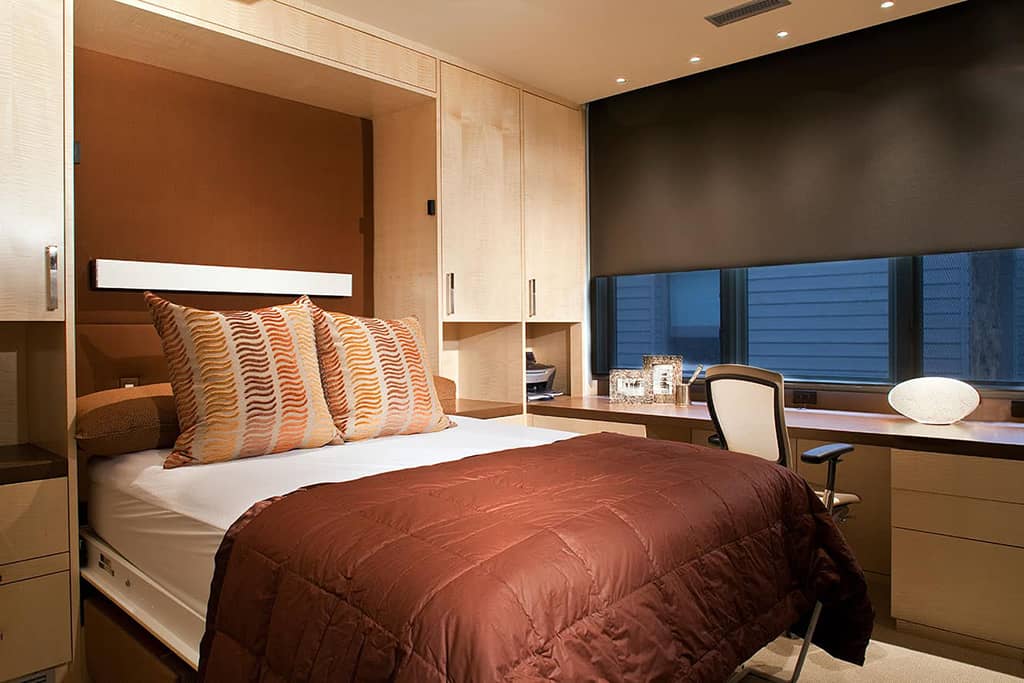 Guestrooms can become a wasted space in a home. If you’re not prone to having people live with you for multiple months out of the year, then having a guestroom is an inefficient use of valuable square footage.

Moreover, because few people can afford to have an entire room in their home that’s only used a half-dozen weeks out of the year, guestrooms have become a bit of a “catch-all” storage closet.

Obviously, when your adult child returns home or your parents visit for Christmas, that room becomes someone’s living quarters. Paradoxically, when you aren’t playing the role of a Bed and Breakfast host, it often devolves into a room where you keep everything from the ironing board to the gun safe to your wedding photos and a filing cabinet.

In the past, guestrooms lacked much flexibility because, as a guest room, the space requires a bed, a dresser, a nightstand, proximity to a bathroom, privacy, and other accouterments commonly found in a hotel room.

Today, however, homeowners are becoming far more creative with how to arrange that space, and the most popular trend is, at the very least, turning the guestroom into a dual (or multi) purpose room. Often, it gets turned into an entirely different space altogether.

The first step is finding furniture that can serve several functions. Guestrooms featuring a day bed—or a Murphy bed—allow room for other fixtures. When necessary, the area can transition into a comfortable sleeping arrangement for Aunt Sheila’s Labor Day weekend visit. However, it can also include a desk and the bookshelves that you need for writing your blog, handling orders from your online store, and that your kids use when doing their homework.

With more and more people conducting their professional business from the comfort of their homes, guest rooms are being turned into workspaces.

Whatever your family or living situation, these are the two most significant matters homebuyers and homeowners are considering when it comes to creating flexible space. Furthermore, if you’re in the market to purchase a home, and you are having trouble finding what you need, a little creative planning with flex space might just bridge the gap.